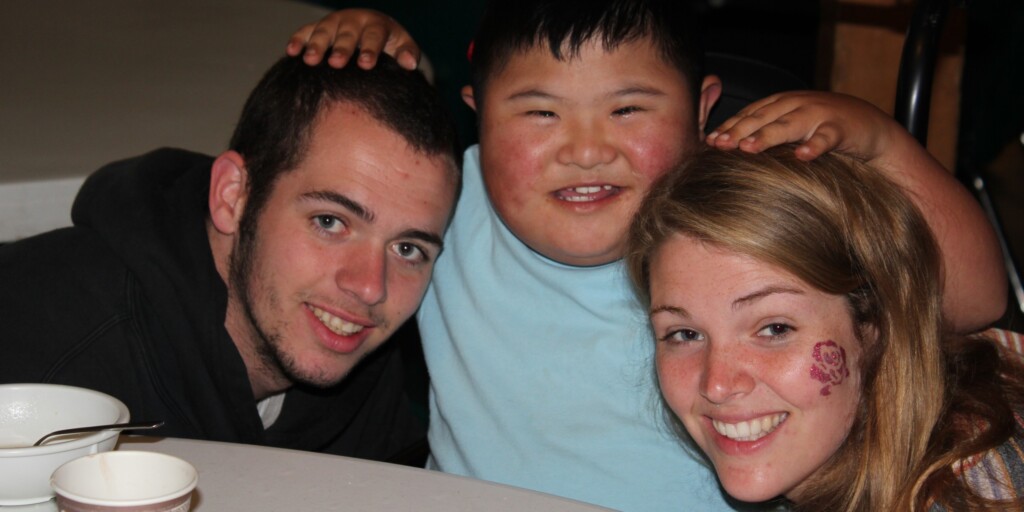 Twin brother and sister Michael and Amy Schleicher’s story starts where a lot of kids’ stories do. They looked up to their big brother, Matt, and when he did something cool, Michael and Amy wanted to do it, too.

In the case of the fateful summer that would point the twins in a long-term direction, that cool thing Matt did was volunteer at MDA Summer Camp. He’d been looking for something to do over the summer, and his mom, Susan Schleicher, who was working in a Danville, Calif., high school career center, saw some flyers advertising MDA Summer Camp volunteer opportunities.

Matt came back from his week at Camp Arroyo, Michael says, glowing.

“He was gushing about how much fun it was, how cool it was, and that he was dead-set on going back the next year,” Michael says. “I was like, ‘That is awesome. I want to go be a camp counselor, too.’”

Of course, like many inspired kid siblings, Michael and Amy were just a little too young to serve as camp counselors — so first, they became camp visitors. Amy, who was interested in film and directing, took her video camera to camp and, alongside Michael, Matt and their dad, Bill, made a documentary on their area camp.

“We fell in love with the camp spirit,” Amy says. “There was so much spirit and so much love. We instantly knew we wanted to come back every year.”

And they did. In time, Michael and Amy became camp counselors at MDA San Francisco’s Camp Harmon. A few years later, Bill, a lifelong tinkerer and gadget lover, took over deejaying the annual camp dance and managing sound for talent shows and other events. And Susan, years after she spotted that MDA camp volunteer flier, eventually became the camp’s arts and crafts leader.

“It was definitely funny that after the fifth year of camp, the entire family was there,” Michael says, “but it made it pretty special. You know, kids can sometimes get stressed or tired, but you could go talk to your mom and dad and they could help you.”

Together, the Schleichers weren’t just lifting up the MDA Summer Camp spirit. They were also strengthening their own bond.

They would need it.

In January of 2009, when Amy and Michael were 18, their grandfather was diagnosed with amyotrophic lateral sclerosis (ALS). After years of helping MDA families, the Schleichers became an MDA family.

“It was a huge thing for us that was devastating,” Michael says. “It galvanized our mission — not having to have other families go through the hurt that we went through.”

MDA become a new kind of cornerstone. A specialist at the MDA Care Center where the twins’ grandfather received care realized the family connection, and so during his appointments, she told him stories she’d heard about Amy’s and Michael’s generosity at Summer Camp.

“I think that made the visits a little less daunting,” Amy says. “Camp was always something he was so proud of us doing, even before his diagnosis.”

And after he passed, Amy and Michael say, volunteering at camp was even more meaningful.

“By that point, we’d formed so many bonds with our campers they started to feel like little brothers and sisters,” she says. “We loved going back.”

The Schleicher family became involved in Muscle Walk, too. Each year, Team Pa, so named for their grandfather, gathers in San Jose, Calif. Amy’s and Michael’s grandmother comes out. And, naturally, Bill is in the deejay booth, paying honor to all of the families there.

After high school, Amy attended the University of California, Riverside, and graduated in 2013 with a degree in film studies. For three years afterward, she worked as a camera operator in the film industry. Michael headed to Las Positas College in Hayward, Calif., where he studied fire service technology and became an emergency medical technician. Later, he also studied criminal justice at Diablo Valley College in Pleasant Hill, Calif.; his combined interests in fire science and criminal justice led to a position as a case manager at a law firm, where he worked on environmental suits.

But neither sibling felt truly fulfilled.

“[My job] was fun and kind of crazy as well, but it wasn’t impacting life in the way I wanted to be doing with my work,” Amy says. Her first thought for a different career option: MDA.

“I’d seen what they did at camp and I had some background about what happened at clinic, in part because of our grandpa and in part from hearing about other families’ experiences,” she says.

She reached out to Colleen Vineer, Care & Clinical Services director for MDA’s San Francisco field office. Amy was living in Los Angeles at the time, but when she discovered there was an open position on Colleen’s team in San Francisco, she made the move.

“I’m glad I picked San Francisco because we’d just known the families for so long,” Amy says. “It felt like coming home.”

Not long after Amy accepted her position, Michael asked her if there might be an opportunity for him at MDA as well. And as luck (or fate) had it, there was an open fundraising position on the San Francisco development team.

“MDA’s done so much for our family, and we’ve been so connected with them,” Michael says. “It was a great fit.”

In her role as a care specialist, Amy is still deeply involved with MDA Summer Camp, recruiting campers and counselors as well as planning and executing new themes and activities each year. She also works with families in three MDA Care Centers, sharing the organization’s mission and creating conditions in which families can build relationships with their care teams.

Michael, as a development coordinator, works specifically with the International Association of Fire Fighters, who partner with MDA in the iconic Fill the Boot fundraising program.

Michael and Amy, says Colleen (who is now Amy’s manager), bring a unique perspective to MDA, its partners, and its families.

“I think they are a true testament to the power of volunteering,” she says, “and how you can get individuals really connected to our mission in ways you wouldn’t necessarily expect. When they started, they were young teenagers. They had no idea they were going to be connected to this in the ways that they are now. They relate to families in so many capacities — as camp counselors, as MDA staff, and as an MDA family.”

The twins say MDA helped shape not only their lives but also who they are today. They’ve seen kids overcome bullying and fears. They’ve made lifelong friendships. They’ve learned not to take themselves so seriously all the time.

They’ve seen, thanks to that very first week, joy.

“Camp is one week,” Michael says. “It’s the easiest thing for me to say it’s a week that you will never regret. Within the first two hours, you see the campers and the counselors and they are genuinely the most amazing individuals. I knew within the first 24 hours that I was going to be back and be tied to MDA for as long as I possibly could.”

“On so many levels, there are so many things MDA does,” he says. “Camp is so important because it allows kids to be just like every other kid and experience things they never thought they could do. And on the research side, the breakthroughs in the past five years speak for themselves. If they give [people] more time with their families, for that family, it’s everything. If you told me I would get more time with my grandfather, that would mean the world to me.

“The hope that it gives, the things that it teaches — MDA does so much for the families.”

Join Amy, Michael, and their family on a volunteer journey with MDA today. Opportunities include volunteering at MDA Summer Camp, MDA’s signature events, in MDA’s communities as volunteer leaders and committee members, or in MDA’s offices. Start your journey today at www.mda.org/volunteer.