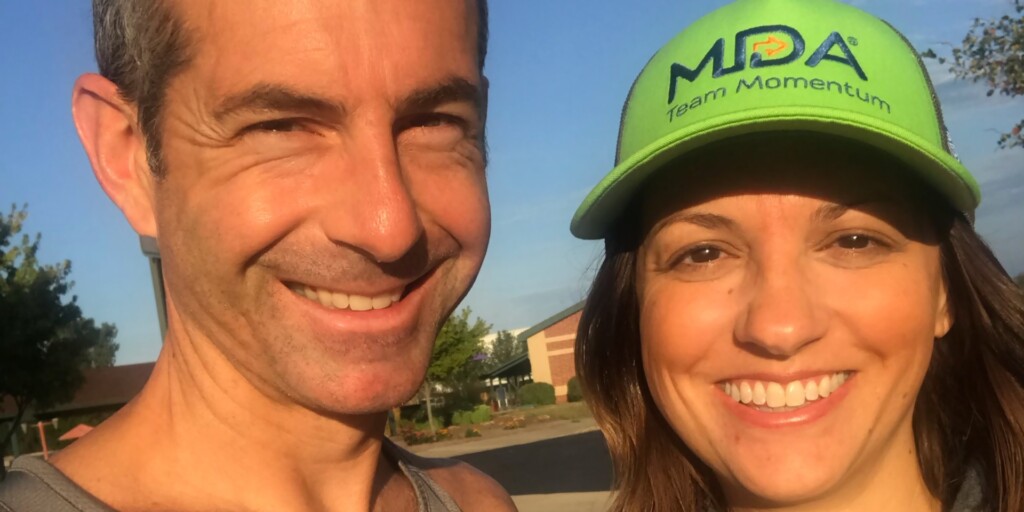 For the last four months, Amy Shinneman has been training to do something she never imagined doing: hitting the pavement as a participant in the Bank of America Chicago Marathon.

“From the time I put my feet on the ground until I go to bed, I have really weak muscles all over my body but especially in my legs and my hips,” Amy says. “I walk with a pretty significant limp. Everything I do is challenging, but over the years I’ve learned to adapt to doing most things my way.”

The Bank of America Chicago marathon is no different. Amy’s way to it: a sleek racing chair loaned by MDA Team Momentum and propelled by Amy’s husband, Jamie, who himself got into running only after the couple’s two sons discovered their skill for the sport.

“I was a soccer player,” says 46-year-old Jamie. “I didn’t really get into running for fun until my boys caught this. I didn’t want them running around the neighborhood by themselves as they were training, so I went out to train with them and eventually caught the running bug myself. So we’ve been doing that as a family — cross-country and track. And you might think, ‘Oh gosh, here is Amy who can’t do any of this,’ but she’s always said that if she had these gifts she would use them. She wants us to be out there and to use these gifts, to get out there and run and jump.”

And now, thanks to the racing chair — or,  as it’s known in the marathon circuit, the duo bike — Amy is getting out there, too.

“This bike is the new thing that’s opened up just another world for Amy, too, to see,” Jamie says.

As a child, Amy didn’t begin walking by a typical time, which concerned her parents. They took Amy to a neurologist; later, different doctors described Amy’s physical challenges as muscular dystrophy, but she was never formally diagnosed with the disease. She volunteered as an MDA Summer Camp counselor in high school and, after college, worked for 16 years in social services helping kids and adults with disabilities.

It wasn’t until just a year ago, at 44, after marrying Jamie (her high-school sweetheart) and having two sons — Luke, now 16, and Jack, 12 — that she finally was diagnosed. During a regular six-month neurology appointment, Amy’s doctor and a genetic counselor brought in a DNA test. The result: Bethlem myopathy. After more DNA testing, Amy and Jamie learned both of Amy’s parents were carriers, which caused the disease to manifest in Amy but not her sister. Luke and Jack don’t have the disease, either.

Getting a confirmed diagnosis, Amy says, was a kind of relief.

“It was one of my biggest struggles, I think, when you don’t know what’s causing so much difficulty,” she says. “It’s not like an illness that will go away in two weeks or a month. It doesn’t go away and nobody can tell you what’s wrong.

“You feel like you’re not a complete person because you don’t know who you are,” she says. “At least, for me, that’s what a diagnosis did — it just brought everything together. There’s a reason for the struggle and the pain. It took a lot of my thinking time. Now, I can focus on Jamie and I both doing the best we can and helping however we can.”

Amy discovered Team Momentum, MDA’s customized endurance training program, and first proposed it as an idea for Jamie. He likes running for causes, and MDA’s mission was a natural one to support. He reached out and connected with Chris Marshall, Team Momentum’s national director, and signed on to run the Boston Marathon in April this year.

Chris was inspired. So, he proposed another idea: Chicago.

“Getting to know Amy and Jamie over the last six months, you can tell that they have passion and love for each other and their family,” Chris says. “When we found out that the running chair was available for use, we knew that we had to find a way to get Amy in it.”

The Team Momentum Chicago staff discovered the marathon had exactly one remaining duo, or two-person running team, entry (out of six) available. After a test run in the chair, Amy and Jamie took the spot — but not without some trepidation.

While Jamie had already been thinking of sourcing a chair to bring Amy into the running world, Amy was worried about the attention the chair would bring.

“I don’t like to be on display,” Amy says. “I get stared at a lot when I’m out in public, and I felt like it could be just another way people would stare at me.”

But she’d seen other people using running chairs. And she’d been to so many of her husband’s and sons’ races. She wondered what that experience could feel like.

“In the beginning of training,” Amy says, “I wanted to go out super-early so people didn’t see us. But doing it on the trail where we go, there are more people there, and they’re so encouraging.”

Team Momentum has provided a support network, too, through its dedicated Facebook group. It’s made what Jamie says can be a solo sport a true partnership — especially for Amy, who’s never been part of an athletic team.

At home, as Jamie has pushed Amy, starting from several miles up to the final 20-mile practice run — just shy of the marathon’s full 26 miles — the couple has talked about their days, their boys, their hopes for the future. Amy takes photos and videos of the journey, which she posts on social media.

“I always tell Jamie that if I close my eyes I can get the sensation, a little, that I’m running, just because of the speed we’re going,” Amy says. “I like to document each one of our runs along the way and share that with people, just from my perspective. I think I’ve seen a lot that I would never have seen otherwise.”

The couple’s goal is to raise awareness of muscular dystrophy, ALS, and related neuromuscular diseases as well as funds for research and care, but Amy also wants to share how adapting translates to living.

“I want to help other people see that just because you can’t do things in the traditional ways doesn’t mean you can’t come up with new ways to do things and see things,” Amy says. “The word ‘disability’ doesn’t bother me at all — I think it’s a word of empowerment and something that I’ve become quite proud of. Living differently can be really challenging, but there’s also a lot of good to see. I see things from a perspective that others will never be able to experience, and when you look at disability in that way, it can become really powerful. You can feel fortunate that you have a disability just to be able to see life in that way. I haven’t always felt that way about it, but I’ve certainly come around to that way of thinking.”

Amy and Jamie will race in Chicago together this Sunday, Oct. 13. And they won’t stop at the finish line. The Shinnemans have been fundraising for MDA during their marathon training, and one of their donors was so moved by the couple’s story they decided to provide Amy and Jamie with a running chair of their own.

They have the TCS New York City Marathon in their sightline. And Amy has a closer-to-home dream, too.

“I would really love for each of my sons to take me on a run,” she says. “You know, when you’re 16, maybe that’s not what you want to do with your mom. But I would love that.”

Learn more about — and join — MDA Team Momentum to run, walk, and fundraise for kids and adults with muscular dystrophy, ALS, and related neuromuscular diseases.