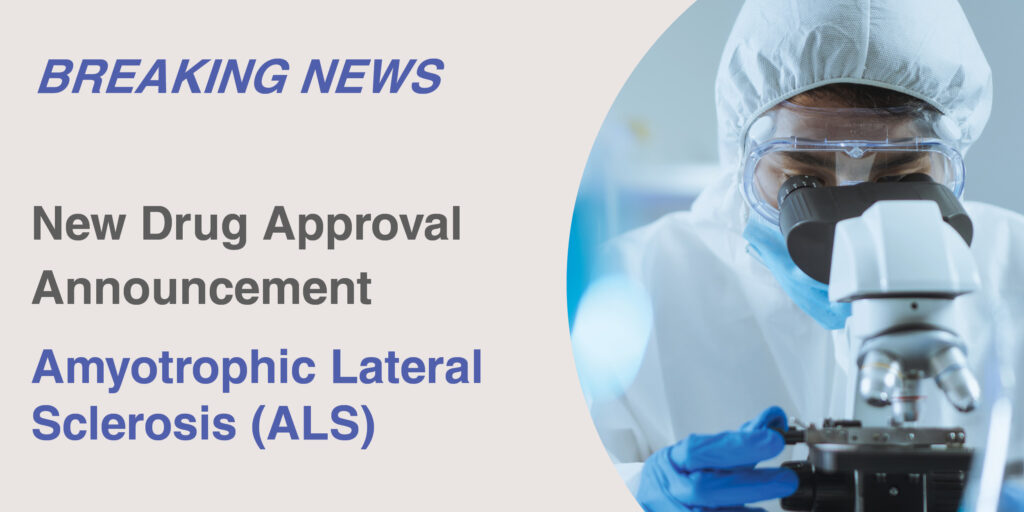 On May 12, the US Food and Drug Administration (FDA) granted approval to an oral suspension of edaravone (RADICAVA ORS) for the treatment of amyotrophic lateral sclerosis (ALS). To date, RADICAVA ORS is the sixth disease modifying drug approved to treat ALS. RADICAVA ORS will be made available in the United States (US) and marketed by Mitsubishi Tanabe Pharmaceutical America (MTPA).

There is currently no cure for ALS and approved therapies only moderately slow the progression of disease. In 1995, the glutamate blocker riluzole (Rilutek) was approved by the FDA for treatment of ALS, and was shown to moderately increase life expectancy by three to six months. Two additional formulations of riluzole have also been approved to address problems associated with swallowing. Thickened riluzole (Tiglutik) was approved in 2018 and a riluzole oral film (Exservan) was approved in 2019. In 2011, the combination of dextromethorphan HBr and quinidine sulfate (Neudexta) was approved for treatment of pseudobulbar affect (PBA), the involuntary crying and/or laughing episodes which can occur in some people with ALS. Finally, 22 years after the introduction of riluzole, the antioxidant drug edaravone (RADICAVA), requiring intravenous (IV) administration, was approved in 2017. With the current approval, people with ALS have a new option in their therapeutic arsenal.

“The approval of the oral formulation of RADICAVA is a helpful step forward for the ALS community,” said MDA Chief Research Officer Dr. Sharon Hesterlee. “Patients are no longer limited to the IV formulation of edaravone. This new formulation can be taken orally or via feeding tube, allowing patients flexibility as to how they take their medication.”

ALS is a progressive neuromuscular disease in which muscle-controlling nerve cells called motor neurons are destroyed, causing muscles to become nonfunctional. This results in muscle weakness, disability, and eventually death. The exact cause for ALS is still unknown. About 10% of cases have known genetic causes, but the remaining cases have no clear cause. Oxidative stress (toxicity due to harmful free radicals) has been associated with several neurodegenerative diseases, including ALS. Radicava is thought to protect neurons from the damage caused by oxidative stress in people with ALS. The oral formulation of RADICAVA will improve access by allowing people to take the drug by mouth or via feeding tube, rather than requiring an IV.

The FDA based its decision to grant approval to RADICAVA ORS on the positive results of several studies conducted over the last decade to evaluate safety and efficacy of the IV and oral formulations of the drug. A pivotal phase 3 clinical trial in 137 people with ALS demonstrated that treatment with RADICAVA slowed loss of physical function by 33% compared to placebo, as measured by the ALS Functional Rating Scale-Revised (ALSFRS-R), a validated scale for monitoring disease progression. The findings of this study lead to the 2017 approval of RADICAVA. More recently, a global phase 3 clinical trial demonstrated the safety and tolerability of Radicava ORS after 24 weeks of treatment in 185 people with ALS. This study was conducted at 50 trials sites in the US, Canada, Europe and Japan, including 15 MDA Care Centers and one MDA Care Affiliate Center. The long-term safety and tolerability of RADICAVA ORS up to 96 weeks is currently being evaluated in an ongoing phase 3 study.

RADICAVA and RADICAVA ORS were generally well-tolerated in trial participants. The most common adverse events experienced by people treated with RADICAVA were bruising (contusion), problems walking (gait disturbance), and headache. Fatigue was observed in some people taking RADICAVA ORS. Hypersensitivity reactions and anaphylactic reactions have also been reported in people treated with RADICAVA.

MDA’s Resource Center provides support, guidance, and resources for patients and families, including information about the approval of RADICAVA ORS, open clinical trials, and other services. Contact the MDA Resource Center at 1-833-ASK-MDA1 or ResourceCenter@mdausa.org.