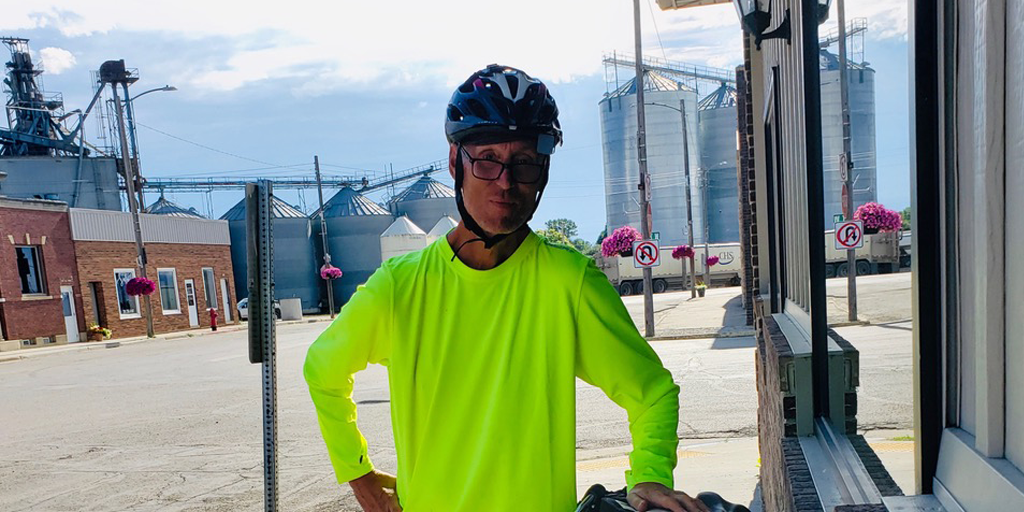 “How Muscular Dystrophy Changed my Life”: A Diagnosis that Led to an Incredible Cross-Country Journey

In May 2019, Jon Olson set out from Astoria, Oregon to bike across the US. He’s dedicating his miles to MDA, the research and care it supports, and the community it — and Jon — represents. So far, he’s raised more than $10,000. He’s ridden more than 2,500 miles and has about 1,000 left to reach New York City.

I first felt the effects of muscular dystrophy when I was in my 40s, almost a decade before I had a name for it. At the time, I was working as a journalist and was building an office in my garage, a place where I could work from home without interruption. In putting it together — studs, insulation, drywall, electricity, heat, internet — I sometimes had to hold a hammer with two hands to pound a nail. And, clenching a tool, I often found it hard to open my fingers to release it.

I’d led a pretty active life. I’d played hockey and baseball as a kid. I biked to school and back, and then got a better bike and went farther. After high school graduation, I rode, fully loaded, with two friends, from Seattle to San Diego, 1,800 miles in 28 riding days. And every year for many years I logged thousands of miles in day rides and bike-camping trips throughout the Midwest. I trained for and competed in two marathons, but by the time I was 50, my steps had become heavy, my footing less sure, and my hands had become so weak I struggled to open a new jar of peanut butter or mayonnaise.

I thought I had arthritis and went to see a hand doctor. He did a simple test — spreading my index finger and pushing it toward the others, while I pushed back. It closed immediately. I could not resist it. In the parking lot of the hand doctor’s office, I had the frightening thought that maybe all my ailments — hands, feet, the increasingly gravelly character of my voice — were connected. I felt instinctively that this was true but didn’t know how it could be possible.

The hand doctor referred me to a neurologist. The neurologist confirmed my fears. He said I had muscular dystrophy — myotonic dystrophy, to be specific, affecting extremities: fingers, ankles, throats. I said, “But I want to ride my bike across the country!” — the ne plus ultra of long-distance riders, the thing you want to do, just to prove you can do it.

The doctor said, “Well, you better go now, because you’ll never be stronger than you are today.”

I didn’t go then. I didn’t go for seven years. The diagnosis brought me down. I didn’t work out, I didn’t ride much. But eventually I did start to ride again, and found that, while my walking was unsteady, while my speech was often unintelligible, I could pedal a bike just fine. So I planned a trip and went.

The ride is the thing I wanted to do. I added the MDA fund drive almost as an afterthought. But it has made all the difference. Instead of an ego-driven achievement, just about myself, the fund drive has made the ride a quest for a better life for those afflicted — a better world, in a way. The ride was the primary thing, but now it is subservient to a higher thing.

It has changed me. I have, in my life, been mostly a bystander, little involved in “charity,” or activities that help others. I would be the first to say that my condition is on the mild side. I am fortunate in that, and grateful that it gives me the opportunity to serve the greater good.

Read more about Jon’s ride, and make a donation to support him and MDA. Inspired to start your own journey? Create your own MDA fundraiser today. And see more of Jon’s adventures at justalittlebitcranky.blogspot.com.