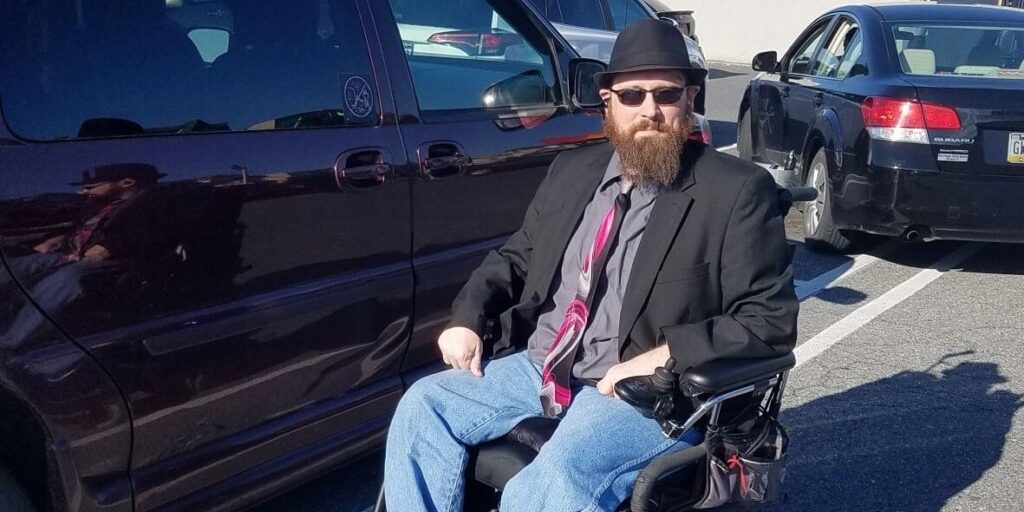 As the Muscular Dystrophy Association (MDA) continues our commitment to empowering people living with neuromuscular disease, we are excited to share our 2022 blog series: “Quest for Success”.

Success looks different to everyone and this monthly blog details the different paths that individuals with neuromuscular disease have taken to reach their potential and the steps they took to get where they are today. Each month we spotlight one individual from our community and share his or her journey to independence and accomplishment. We hope that these stories empower and inspire our readers to unlock the possibilities in their own lives…because the possibilities are limitless.

IT Manager Paves a Path to Independence 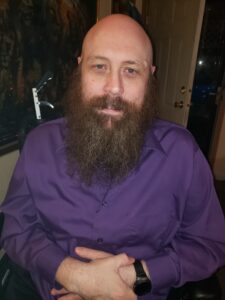 Matthew Lawson didn’t always know exactly what he wanted to do when he grew up – but he was certain of one thing that he wanted to be: independent. The 43-year-old Information and technology (IT) Manager was diagnosed with spinal muscular atrophy (SMA) type 3 when he was six years old. He set an early goal to seek an education and gain employment with a stable income, so that he could navigate the world as an independent adult.

With tenacity, a lot of hard work, and just a little bit of luck, Matt can happily say that he has reached his goal. He obtained his college degree and carved out a niche for himself through his employment and advancement at Abilities in Motion, a Center for Independent Living (CIL) in Pennsylvania. Recognizing that available resources and accommodations exist to support the goal of self-sufficiency is one of the greatest lessons that he has learned on his quest for success.

Growing up with a father who served in the military, Matt learned the value of hard work, perseverance, and independence at a young age. He credits his father with teaching him to make his own decisions and to own the consequences of those decisions. With his father’s encouragement, it was never a question of if he could support himself as an adult – for Matt it was figuring out how.

Matt’s philosophy of owning his actions contributed to his determination to achieve goals and complete tasks regardless of obstacles. He was highly involved with the Boy Scouts of America in his youth. An experience that allowed him to build self-confidence and tenacity. Matt shares that being a Boy Scout taught him that, despite his physical limitations, he could do anything that the other children could do. When earning badges in Boy Scouts, a scout must complete designated tasks as they are stipulated. If he didn’t complete the tasks, he didn’t earn the badge. Matt learned that even if he had to work a little harder at something, finding his own path or taking more breaks, he could reach the same achievements as his peers.

During elementary and high school, Matt’s diagnosis presented primarily as fatigue and muscle weakness. He was ambulatory with a cane but would tire more quickly than other children and teenagers. During his time in Boy Scouts and in the small, private school that he attended, it did not occur to Matt to request accommodations. With a “do-what-I have-to-do” mindset, Matt navigated the stairs in his three-story school building and carried heavy books with difficulty and exhaustion.

It wasn’t until he connected with the Office of Vocational Rehabilitation (OVR) and began planning to attend Reading Area Community College (RACC) that Matt realized that he could ask for assistance and accommodations that would meet his needs and enable him to reach his potential.

Matt became involved with his local OVR while he was in high school. Every state offers occupational and educational rehabilitation services to assist people with disabilities in pursuing educational and occupational goals. Matt knew that he wanted to seek a higher education in order to meet his goal of becoming an independent adult; he sought out resources at OVR to help him do that. Matt also utilized OVR resources and a low-interest loan from Pennsylvania Assistive Technology Foundation (PATF) to obtain a modified vehicle. 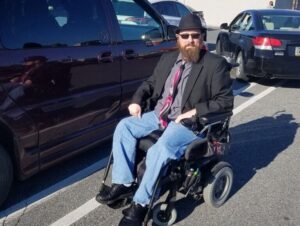 Matt Lawson next to his modified van.

His experience with OVR opened his eyes to the idea that there are accommodations and resources that exist to assist in limiting barriers and increasing independence. His first time experiencing such assistance come to fruition was when he attended RACC.

By the time that he started college, Matt had also begun to use a scooter for mobility. The school facilities were accessible for his scooter, but he needed a time accommodation in order to travel between back-to-back classes. He worked with an advisor who was specifically designated to handle disability related requests. Recognizing accommodations available to him opened Matt’s eyes to the increased possibilities that awaited him in adulthood – and opened doors to understanding the power of asking for what he needs.

Before recognizing his right to accommodations, Matt joined the workforce after graduating from high school so that he could save money to pay for college. He obtained employment at a gas station and attempted to complete all physical tasks that the position generally required. When long, active shifts became a challenge for Matt, a conversation with his supervisor resulted in termination of employment. Matt shares that in retrospect there were accommodations that could have been made to maintain his employment. While he didn’t think of it at the time, shorter shifts or more time mid-shift sitting as the cashier would have alleviated the physical strain.

“Understanding a lot of these things now is part of the experience of being exposed to the world as you have had to interact with it,” Matt says. “You learn a lot of the ins-and-outs that they don’t explain to you at school and that you have to learn yourself.”

The biggest lesson that Matt has learned on his journey is to always ask. If there is an accommodation or modification that can allow an individual to do his or her job to his or her full potential despite physical limitations, ask for it. As luck would have it, his first job as a college graduate was at an agency that prioritizes accommodations and accessibility.

The path to IT

Matt initially connected with Abilities in Motion (AIM) as a client. He wanted to gain a better understanding of how to navigate Social Security benefits while working, so he contacted a counselor with expertise in the Ticket to Work (TTW) program.  Most CILs offer similar services to individuals living with disabilities. While learning about TTW, he discovered that AIM was hiring a front-desk receptionist. He applied and began working full time. 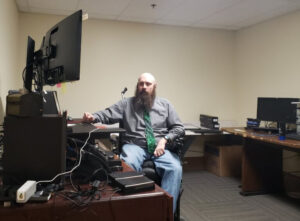 Matt Lawson in his office at Abilities in Motion.

As his role evolved over the years, taking on more and more IT tasks, he was promoted to an IT Specialist and eventually the IT Manager. He no longer receives benefits from SSDI, Medicare, or Medicaid. He is thankful that he was able to access those resources when he needed them, but also feels proud that he is now able to live independently of them. Matt shares that careful financial planning and diligent building of emergency resources were crucial to his success.

Matt currently uses a power wheelchair and is able to stand for short periods of time. His biggest accommodation need at present is an accessible layout. Matt’s employer works with him to ensure that he has enough room in his office space and that things are within his reach. He also has a desk that was built specifically for him that allows him to stand and stretch throughout the day. Flexibility with his schedule is also essential for his success.

Matt lives with family members but, other than some heavy lifting, he independently completes all areas of daily living. He does not use home health aide services for assistance, and he drives himself to work in his modified van. His morning routine requires a significant amount of time and energy. Being offered flexibility in the morning allows Matt to navigate his morning routine more effectively. He considers himself lucky to be working for an agency that prioritizes accommodations, but also wants others to know that all employers have a responsibility to make accommodations – and most have a willingness.

Utilizing the programs that exist for you

Matt understands the many concerns that individuals with disabilities may have when it comes to seeking an education and joining the workforce. He shares that while these concerns are valid and the road is not always easy, there are a few key things to remember. “There are resources out there that can help you reach your goals. They take effort and time, but they are usually well worth it,” he says. “You have so much to give. The world wants you to be a part of it. That is why these programs exist.”