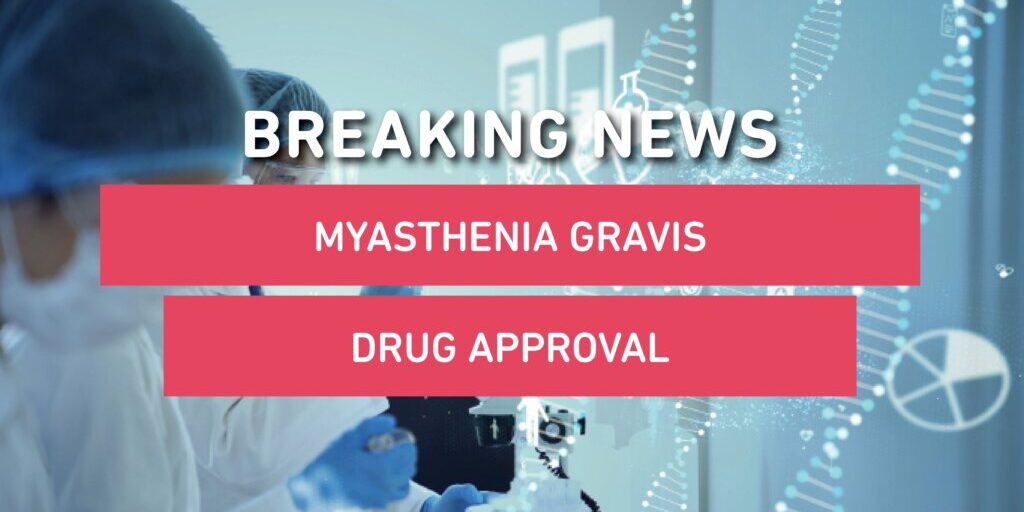 On April 28, the US Food and Drug Administration (FDA) granted approval to ravulizumab (Ultomiris) for the treatment of generalized myasthenia gravis (gMG) in adults who test positive for the anti-acetylcholine receptor (AChR) antibody. To date, Ultomiris is the third disease modifying drug approved to treat gMG. Ultomiris will be made available in the United States (US) and marketed by Alexion, the group within AstraZeneca focused on rare diseases.

There is currently no cure for gMG. Recommended treatments for gMG include drugs that may alleviate symptoms, such as cholinesterase inhibitors, or treatments that may alter the disease course, such as immunosuppressive drugs or surgery (thymectomy). In Oct. 2017, eculizumab (marketed by Alexion as Soliris) became the first disease modifying drug approved by the FDA to treat gMG. Eculizumab was approved for adults living with the gMG subtype known as acetylcholine receptor antibody-positive (AChR ab+) gMG, which affects 80-90% of people with gMG. In Dec. 2021, efgartigimod (marketed by argenx as Vyvgart) became the second disease modifying drug approved in the US to treat adults with AChR ab+ gMG. With the current approval, adults with gMG have a new option in their therapeutic arsenal.

“The approval of Ultomiris is an important step forward in treating gMG,” said Dr. Sharon Hesterlee, Chief Research Officer for MDA. “This new drug represents another option to meet the treatment needs of more people living with the disease and is another important milestone for the field of gMG research and drug development.”

gMG is an autoimmune disease of the neuromuscular junction. It is caused by autoreactive antibodies that destroy the communication between nerves and muscle, resulting in weakness of the skeletal muscles. Ultomiris is designed to target a component of the immune system (known as complement), which underlies many autoimmune disorders including gMG. Although treatment with Ultomiris will not cure gMG, it could lead to functional improvements that improve the daily life of individuals with gMG.

The FDA based its decision to grant approval to ultomiris on the positive results of the CHAMPION-MG phase 3 trial (NCT03920293), which evaluated the safety and efficacy of Ultomiris in 175 adults with gMG living in North America, Europe, Asia-Pacific and Japan.

Ultomiris was generally well-tolerated in trial participants, with the most common adverse reactions being upper respiratory tract infection and diarrhea. The trial met its primary endpoint, demonstrating that Ultomiris treatment of people with (AChR-Ab+) gMG resulted in clinically meaningful improvements in symptom severity, as measured by the Myasthenia Gravis Activities of Daily Living (MG-ADL) score. Improvements in secondary endpoints evaluating disease-related and quality-of-life measures were also seen. Data presented by the trial sponsors at the 2022 American Academy of Neurology Annual Meeting demonstrated that Ultomiris has some benefits over existing treatments; treatment every eight weeks has a long-lasting clinical benefit through 60 weeks of treatment, compared to treatment with Soliris every two weeks. After completing the CHAMPION-MG trial, all participants were eligible to receive Ultomiris in an open-label extension period of the study, which is ongoing.

Ultomiris works by inhibiting the C5 complement protein, which is a component of the body’s immune system. In the context of gMG, uncontrolled activation of C5 and related complement proteins may cause the immune system to attack healthy cells in the body. Following an initial loading dose, Ultomiris is administered intravenously (in the vein) every eight weeks in adult patients. Ultomiris is also being evaluated for the treatment of people with other hematology and neurology disorders.

To learn more about the approval of Ultomiris, read the company’s press release. For more information about the CHAMPION-MG trial, visit ClinicalTrials.gov and enter “NCT03920293” into the search box.

MDA’s Resource Center provides support, guidance, and resources for patients and families, including information about the approval of Ultomiris, open clinical trials, and other services. Contact the MDA Resource Center at 1-833-ASK-MDA1 or ResourceCenter@mdausa.org.