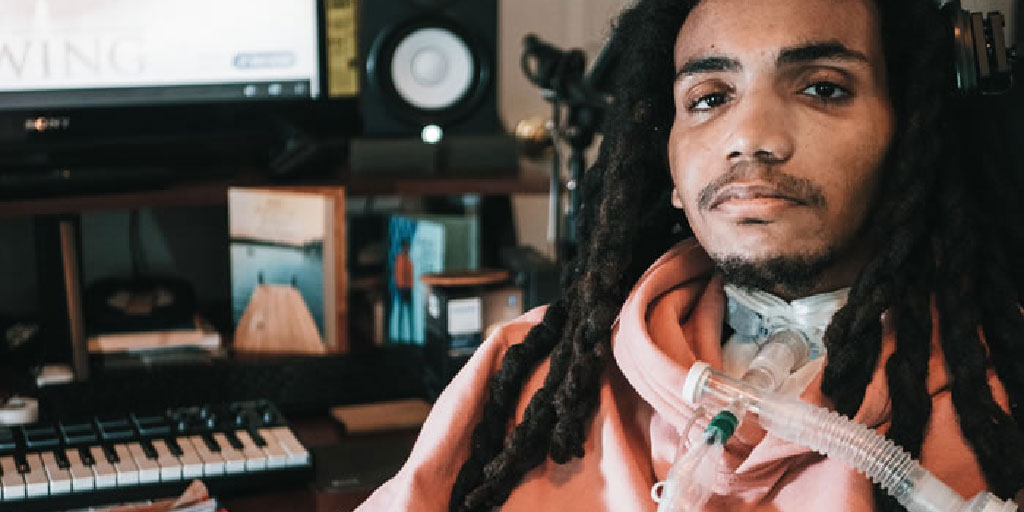 This photo shows Leslie, a former MDA Summer Camper who lives with Duchenne muscular dystrophy (DMD), in his natural element, with his music equipment behind him in his home studio. A lifelong music lover, Leslie produces music under the name J0K3 (find him on social media @jokemusic3).

“When this photo was taken, I had just gotten through a rough moment,” Leslie says. “I was hospitalized about a month before this — also four times in 2020. I think those hard times inspired me.”

The photo was taken on the first day of shooting a documentary that Leslie is making through his nonprofit iNeed2Go Inc. The documentary, which he is making with the help of friends, will tell the stories of Leslie and others who are living with disabilities. While filming, his friend, the musician, photographer, and filmmaker known as Trvy, stopped to snap a few photos.

“I wanted him to capture me in my natural state,” Leslie says. “That whole day was just spontaneous, and the photos were shot on the fly. Trvy also commented on how he admired my resilience.”

Congratulations to Leah Hover-Preiss, of Wisconsin Dells, Wisconsin, a runner-up in our photo contest.

Leah captured this sweet moment between her daughter, Harper, then 3, and Harper’s dad, Zach Preiss, in October 2020.

“This was the first time Harper was able to support herself to stand and give her dad a hug,” Leah says. “This was a very special moment for our family.”

Harper, who lives with spinal muscular atrophy (SMA), had been taking Spinraza for about a year and a half when this picture was taken. She also has physical therapy and occupational therapy. “Harper pushes herself to do things we never thought would be possible — including trying to keep up with her 9-year-old brother,” Leah says.

Congratulations to David Leatherman, of Cedar Rapids, Iowa, a runner-up in our photo contest.

David, who lives with Gowers-Laing distal myopathy, submitted this photo of a special moment with his wife, Anna, on their wedding day.

“Anna and I have made it a point to not hide from this disease and to be thankful for what we do have,” David says. “The symbolism in this picture is amazing: We start each day facing new challenges, but we do it together, unified as husband and wife.”

View from the top

Congratulations to Nicklaus James Shorten, of Portland, Oregon, a runner-up in our photo contest.

This photo shows Nicklaus on Mount Hood in May 2021 after riding his bicycle to the top.

“I rode up there by myself from Portland,” he says. “While this may not be the biggest accomplishment by a cyclist, as someone with Charcot-Marie-Tooth disease, it felt spectacular.”